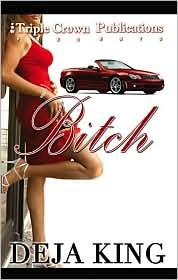 Bitch by Deja King
3.5 stars
196 pages
From bank of the book:
Precious Cummings came from nothing but was determined to have it all. Using her most deadly weapons - undeniable beauty, body and street savvy brains, Precious sets out to change the cards that sheÂ’d been dealt. After meeting Nico Carter, a man who can help her achieve her goals, virtually overnight she is on her way. Precious quickly transforms from Project Chick to Hood Queen and is determined to hold on to her position even if it means crossing the man who made it possible. Set on revenge, Precious gambles it all in her quest to gain everything. Just when she believes the dice have rolled in her favor, Precious has to answer for the web of deceit that she has set in motion.
My Thoughts
This story flows well. Precious is cold-blooded and outright selfish. Unfortunately the personality of Precious is a familiar one. She goes along with the status quo and with her looks she is able to "pull" the higher level thugs. She thinks with her ego and those decision come back to haunt her. The book is entertaining. The characters are believable. The ending was not a surprise. If I did not know that there was a sequel the ending would not have been very satisfying. If you like urban lit then you will enjoy this book. Happy Reading
Posted by Bunnita at 1:15 PM 2 comments:

I know that it is Tuesday but yesterday was a holiday here in the States so the post office was close. To my surprise today I received an uncorrected proof copy of Venom by Joan Brady. Here's the synopsis for the back:

Recently released from prison, David Marion didn’t expect to find a hitman at his door. Warned that a powerful secret organisation is after him, David goes underground and off the radar–waiting for the perfect moment to wreak revenge.

Physicist Helen Freyl has just accepted a job offer from a giant pharmaceutical company who are close to finding a cure for radiation poisoning. But when the mysteriously sudden death of a colleague is followed by another, Helen begins to doubt her employers’ motives and realises that her own life is in danger, too.

Venom brings David and Helen together as they fight for their lives against a backdrop of industrial espionage, corporate greed and human tragedy in this exhilarating and fast-paced follow-up to Joan Brady’s bestselling Bleedout.

I got this book from Book Chick City thanks so much. This book was sent out because I am taking part in the Thriller and Suspense Reading Challenge 2010.
Also that you to publisher Simon & Schuster UK. It is always great when publishers are willing to participate in giveaways/prizes.

Posted by Bunnita at 2:38 PM No comments:

The Aftermath by Anna J

The Aftermath by Anna J

Monica from My Woman His Wife is back to show you why even the mere thought of a mge a trios with your spouse and an outsider should never enter your imagination.
It's been three months since the Cinque household has been turned upside down by a sexual tryst gone terribly wrong. Although Jasmine and James are making moves to put their broken home and broken hearts back together, past lies and a lack of trust make it almost impossible to salvage what once was sacred. It's even harder when with a conniving woman like Monica throwing salt in the wounds from the sidelines because she still hasn't gotten what she wants.
Old family secrets are revealed and half truths are exposed as marriage vows are put to the test, painful memories are relived, and revenge is at the top of everyone's list. Drama, betrayal, and lust are all found on the pages of Aftermath -- when once just isn't enough.

I enjoyed this book. The characters struggled with the decisions that they made and the consequences of those decisions. Even after everything that happen in the first book the characters still was not 100% honest with each other. To start over and start fresh you must be willing to put everything on the table. As the saying goes, what is done in the dark eventually finds its way to the light.

This is not a stand alone book. It would be advisable to read the first book My Woman, His Wife first to truly understand what went down. I would rate the book as 3 stars if read before the fist one. It is entertaining but the first book is more sexually charged.

Posted by Bunnita at 2:35 PM No comments: