The Feature & Follow is hosted by TWO hosts, Parajunkee of Parajunkee’s View and Alison of Alison Can Read. Each host will have their own Feature Blog and this way it’ll allow us to show off more new blogs!


Change the Plot. If you could, what book would you change the ending or a plot thread? Go ahead and do it…change it.

I can't think of any book where I would change the ending. So I will go to my fav standby, Harry Potter. There are people who didn't like the pairings at the end even though anyone could see that Harry and Ginny was always suppose to hook up same with Ron and Hermione. Thing one thing that left me hanging that I would have liked to have knows is what did Harry end up doing for a living. Did he do what he had to become and Auror? We know that he didn't end up working at Hogwarts because per a conversation with his son.
Posted by Bunnita at 12:34 PM 7 comments: 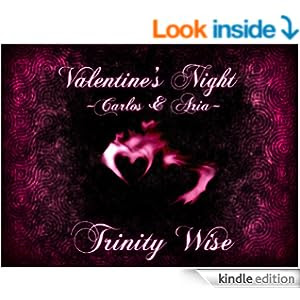 From Amazon:
This novelette introduces the spicy couple, Aria Cambridge and Carlos "Stone" Wilkins, who by chance become re-acquainted at the most unlikeliest of places on the most ironic of days.
Carlos is a deeply-scarred bachelor who never expects to find anything interesting at Club Carnal on Valentine's Night but when Aria graces the stage, he is ensnared by her seductive dance.
Aria works as an exotic dancer named Plenty and is nothing short of surprised to see a face from her past. She is determined to show Carlos all that he missed out on but her plan goes awry as she realizes that she may be getting in way over her head while playing the game of seduction.

My Review:
This is a great short story. A few pages long, Wise fleshes out these characters pretty well. Carlos is sexy, confident, and cocky. He has it going on from his intelligence, looks, personality and he knows it. Aria is a stripper as a job but does not let it define her.

There is a definite story line. Carlos has been hurt by a previous relationship. Not wanting to go through the pain his ex had put him through, he became a woman juggling ladies man. The bachelor life is no longer as fun as it once was. He wants something more but with the hurt of a fail relationship on his mind it won't be easy for him to let someone get close again.

Aria had a big time crush on Carlos years ago. Realizing who he was once she had brought him up on stage during her act ignite old feelings in her. Could she be the one he falls in love with? That question is unknown. One thing is certain, the sexual chemistry between the two will leave them coming back for more.

Aaron aka Old Money has it all on the outside but his sense of entitlement made him off limits to Plenty. Not used to being turned down, he is angered when he is rejected again. When things get physical outside Club Carnal, Aaron swears vengeance.

This is a sexually explicit story. What is rare with this one? It is focus on Aria's pleasure only. So ladies take a few minutes to read a little something to get you in the mood. Oh, and fellas read it and take notes. Once is great but multiples are ooooohhhh so much better!

Posted by Bunnita at 7:00 AM No comments: