If you have look at my page on the side named reading challenges you'll see that I signed up for alot of them this year. I have fallen back on my reading in the past couple of months. I think that I am back on track now. Work had alot of things going on since I have a couple of extra tasks that I have to do and I am trying to position myself to take on another task. In these times of lay offs it's a good idea to try to learn as much as possible to make yourself more valuable. Also I just became president of our site Toastmasters club. Plus going to school full time. Oh and I started going back to that gym so that has been wiping me out.

I still have hope of finishing all of my challenges though. I just finished reading The Hood Life, an urban/street lit novel. I loved it. I am going to start Blown Coverage by Jason Elam & Steven Yohn. I got it two years ago (WOW that long) as a ARC and never got around to reading it. After that I am scheduled to read New Moon but I may replace it with something else, not sure yet. So what are you reading?

***I'm not sure who started this meme...sorry

Buy One Book & Read It

Buy One Book & Read It
Hosted My Friend Amy It's that time of year again!
The time of year when I encourage you to pull out those wallets and buy a book...and then actually read it!

The Buy One Book and Read It Challenge is back. This challenge started when I read the depressing statistics that something like half of the adults in the United States wouldn't read a single book over the course of the year. Nothing plunges me into the depths of despair like that, so I decided to encourage people to read a book. When I also realized that bookstores and the publishing industry was suffering, I decided to add on the buying part.

There are two levels to this challenge:
1) Buy One Book and Read It.
This level is good for people who don't read often but think that would like to read more. It's also good for people who don't buy books. If you don't read much or don't buy many books, this is your level.
2) Level Two--Buy one book and read it every month
You don't have to buy a book in January and read it in January, but you must buy 12 books that you also go on to read during the year. This level is ideal for book bloggers notorious for the buying part, but not so much the reading part.

Rules 1) The book you read must be for pleasure. It cannot be a book you are reading to your children, for work, for research. This is all about fun.
2) The book(s) can be print or electronic. Unless you are unable to read print, audiobooks don't count towards this challenge.
3) Make sure to add your links to the Mister Linky that will go up by January 1st.

Please spread the word! The whole idea of this challenge is to spread the love of reading in manageable bite-sized pieces.

Prizes: Everyone who completes the challenge at the level they signed up for will be entered into a drawing to win a ten dollar gift certificate from Gift Certificates.

I am doing level one:
The Hood Life
Posted by Bunnita at 11:38 PM No comments:

The Hood Life by Meesha Mink and De'nesha Diamond 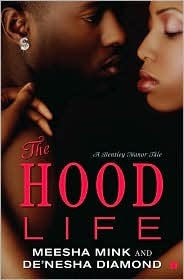 From the back of book:
A pimp, a killer, a playa, and a drug dealer struggle to get their game right in a sizzling novel where leaving the life and trying to go straight is a deadly option.

Tavon, better known as "Sweet," would pimp his own mother — and he does. Convinced that the prostitution game chose him, Sweet loves his high-rolling life. But when he unexpectedly becomes a father, will Sweet be able to choose between the family trade and his grown, not-so-innocent daughter?

After ten years in prison, the drive-by Demarcus committed still haunts him. Determined to stay above the law, he's found Allah, promised to change his ways forever, and finally do right by his girl, Zoey. But when an opportunity arises that will set him and Zoey right for life, Demarcus may have more faith in his killah reputation than the Koran....

Kaseem runs every single drug going in and out of Bentley Manor. His empire provides clothes, cash, and his satisfaction of his wifey, Quilla — along with the company of other ladies, of course. But when Kaseem's crew becomes more violent, will he be able to escape the life — and the gangsters — he created?

The best playa on the block, Rhakmon can get a woman to do anything he wants. His latest girlfriend, Shaterica, lets him steal, lie, and cheat — smitten to be under his spell. But when Rhakmon's devious deeds are finally brought to light, the revenge Shaterica plans may ultimately be more horrible than anything he could have imagined....

My Review: Well the ladies have done it again. The book is fast paced. I like that it focuses on four men this time around. There are so many WTF moments. It start right in the first couple of pages. I mean this things that Tavon is make you think what in the world is up with that?! As usually the ladies keep you up on your toes with the twists and turns. This is book three in the trioloyg of the Bentley Manor series though I hope that there will be another.

After all, there are some characters I would love to know what happened after the the drama. Like what are Lexi, WooWoo, and Aisha up to. Apparently WooWoo is visiting Has in jail so what is going on with that. Princess became a singer and we all know there's drama in Hollywood. What happens with Sweet aka Tavon? How about Rhakmon and Kaseem? Come on ladies don't leave us hanging like this. TBR list #1

challenges:
Buy One Book & Read It
Outdo Yourself Reading Challenge 2011
Posted by Bunnita at 11:23 PM No comments: 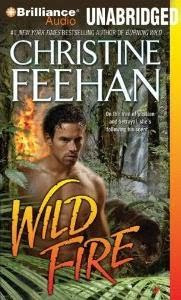 From back of book:
Called on a dangerous assignment, leopard shifter Conner Vega returns to the Panama rain forest of his homeland, looking every bit the civilized male. But as a member of the most lethal of the shifter tribes, he doesn’t have a civilized bone in his body. He carries the scent of a wild animal in its prime, he bears the soul-crushing sins of past kills--and he’s branded by the scars of shame inflicted by the woman he betrayed. Isabeau Chandler’s a Borneo shifter who’s never forgiven Conner--or forgotten him. The mating urge is still with her, and when she crosses Connor’s path, passions run like wild fire. But as Connor’s mission draws Isabeau closer, another betrayal lies waiting in the shadows--and it’s the most perilous and intimate one of all.

My Review:
I was torn with this book, like with her Carpathian series, Feehan has a repetitive style. Having read so many of her Carpathian novels it can become tiring. Liquid heat this, dark desire that. The love scenes just don't do that much for me anymore. This book in particular did not get my temperature warm. The story lagged. I found myself just waiting for it to end. Speaking of the end. I enjoyed the last disc, especially the last few tracks. In fact, without the love scene and the passion felt descriptions between the two main characters the book was actually interesting. The drug trafficking, the kidnappings, the force servitude could have made for a great story. Unfortunately, Feehan novels are romances focused on the relationship between the two main characters anything else that happens in the book is just a backdrop. I would have preferred the backdrop in this novel. TBR list #4

Challenges:
I Spy Title Challenge
A to Z Around The World Challenge
Olympic Challenge London 2012
Posted by Bunnita at 11:29 AM No comments: 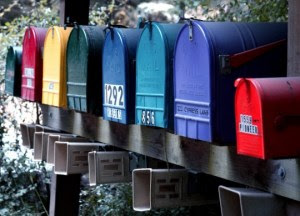 Mailbox Monday is a gathering place for readers to share the books that came into their house last week and explore great book blogs. Warning: Mailbox Monday can lead to envy, toppling TBR piles and humongous wish lists.

hosted this month by Passages to the Past

So this is what I got on Saturday from the Borders closing near me: