Time frame is one month April 14th to May 15t

So what do you have to do?


There are two ways to when this badge.

*First way: read at least 3 books with the word Perfect in the title.


Points - 10 points (max 30 points) an additional 25 points for completing the challenge. Meaning you read all 3 will receive 30 points plus 25 bonus points for a total of 55 points.


***Yes, you can do any combination of the two options. Ex: read 2 books with perfect in the title and 1 book that you have given a perfect rating to.


Have Fun and Happy Reading!!!

If I left you out leave a link in the comments so I can find your books. Thanks and congrats to our Prefects! Here are your badges

Naked in Death by J.D. Robb

Naked in Death is the first book in the In Death series. The series stars Lieutenant Eve Dallas. In this book we learn some of the background into Eve's childhood. The abuse, neglected, and ultimately the adandonment. It took such a toll on her emotional that she blocked out everything before the age of 8.

This first book starts off with the murder of a far right Senator granddaughter. As the story unfolds a laundry list of lies, betrayal, and deceit comes out. The murder and subsquent murders are horrific. What set these murders apart from others that Eve has dealt with is the murder weapon, it's quite unusual for this not so far in the future crime novel.

The past of this book is fast. Some may get bogged down or deterred by the new term (which I will list later). There are several suspects that keeps the readers interest. And the sexy, powerful, and rich Roark is introduced to us. I recommend you read this novel. I would say it should be on your to read list but probably not on the top of it.

Posted by Bunnita at 3:21 PM No comments: 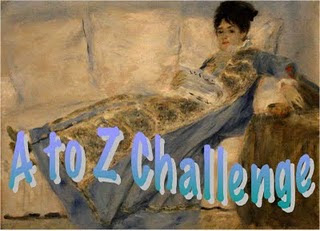 How does this reading challenge work? Choose the option that works best for you...


How strict is the 26 or 52? I know it isn't always easy to find those difficult letters. The thought of finding the X's (for example) might scare folks away. It shouldn't! I'm a merciful host! (Ask anyone!)

If you want to give the X's a go... For authors, try to find an X in the first name, middle name, or last name. For titles, it doesn't have to be the starting word. Try to find an X somewhere in a title, and it'd count in my book.

Still can't find a book for the letter you need? I'll take your word for it. I've been there. I know. If your library doesn't see the need to order books just because it starts with an X, then I don't blame you for not wanting to special order a book that you may or may not enjoy. You gave it your best, don't feel bad. You can still make this challenge work for you.

Posted by Bunnita at 7:09 PM No comments: 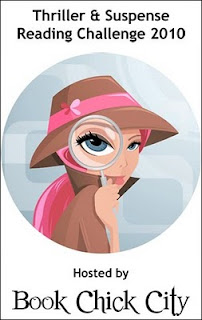 To read TWELVE (12) thrillers in 2010
Details:
• You don't have to select your books ahead of time, you can just add them as you go. Also if you do list them upfront then you can change them, nothing is set in stone! The books you choose can crossover into other challenges you have on the go.
• If you decide to participate in this challenge please use the links I have set up below with the buttons to post on your sidebar, this way others can find their way back to this post and join in the fun.
• If you decide to join this challenge be sure to create a post telling others, please make sure you add a link back to this post so others can join in.
• You can join anytime between now and the later part of next year.
• You can find link to specific month to link your reviews HERE and be entered into the monthly prize draw. Non-bloggers welcome.
Now, there are many different sub-genres of thriller, so don't go thinking that you don't actually read these kinds of books because I bet you read more than you think. As I mentioned above you can choose from the numerous sub-genres, from cosy mysteries such as Agatha Christie to the more hard-boiled kind like V I Warshawski by Sara Paretsky, or even supernatural/paranormal suspense written by the likes of Laurell K Hamilton (Anita Blake) and Kelley Armstrong. So, there you have it, this challenge will have something for everyone I'm sure! :)
Naked in Death by J.D. Robb 04/05/2010
Posted by Bunnita at 6:47 PM 1 comment:

J.D. Robb is the pseudonym used by Nora Roberts. J.D. Robb has written the In Death series starring main character Eve Dallas. I have decided to read and of course review all the books. There isn't a time frame for this endeavor, it'll take as long as it takes. I will also update the lingo as the series takes place in the near future around 2050.

The In Death Series

In Death stories included in Anthologies

Posted by Bunnita at 4:04 PM No comments:

Remember When by Nora Roberts and J.D. Robb

My first thought about the book was “written by me and me” how weird is that? I am not sure how many people know that that J.D. Robb and Nora Roberts are one in the same. I thought what a clever way to get Nora Roberts fans to read J.D. Robb and vice versa.

The first part of the book is written by Nora Roberts. It, of course, gives the set up and background information for the plot throughout the novel. Roberts part is more about the love story between Laine Tavish and Max Gannon. The circumstances that brought them together is an important aspect of the novel as a whole but is more the means of getting the couple together in the first part of the book. Laine Tavish was born Elaine O’Hara, daughter to Jack O’Hara. Jack O’Hara was a theft and was passing that legacy on to Laine until her mother decided enough was enough and moved. Laine changed her name not because she was totally ashamed of her father but she was afraid that the name would prevent her from having the life she wanted because of people who believe apple not falling far from the tree. Max Gannon is an ex-cop turn private investigator. He was hired by the insurance company to track down over 28 million dollars of stolen diamonds. His investigation leads him to Laine and from there his heart never stood a chance. (First part takes place in 2003)

The second part of the story is written by J.D. Robb. It focuses more on the diamond heist. In the first part we learn that the diamonds were split into four parts. Jack pocketed a few stones just in case something happen with his share but 3 of the parts was found, one was still out there. Samantha granddaughter of Laine and Max wrote a book about the diamond heist. After coming off of her book tour she finds her friend and house sitter dead. It is up to Lieutenant Eve Dallas, newly promoted Detective Peabody and the ever endearing Roark to find out who is behind the murders. Eve is certain that whoever it is has a personal connection to those diamonds. The underlining theme of this novel is the question of nature or nurture.

I listened to the audio version of the book. The flow and pace was smooth. I never felled bogged down by too much useless information or stalling. The reader, Susan Erickson, does a wonderful job. With audio books, the reader’s voice is just as important as the story. If I do not like the reader’s voice then my experience with that audio book is done. Overall this was an entertaining read.
Posted by Bunnita at 3:16 PM No comments: