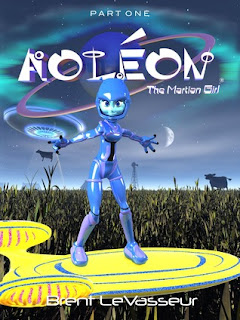 Summary:
Mars wants our cows (yes, cows!) and they're sending an invasion fleet to take them from us. Only Gilbert and Aoleon the Martian Girl stand in their way!

Gilbert always longed for adventure but now that he has it, he's not sure that it's everything it's cracked up to be. Ever since the night he met Aoleon the Martian Girl sitting in the middle of a crop circle in Farmer Johnson's field, it's been nothing but one wild ride after another.

From fighting off swarms of giant killer robots to dealing with strange aliens from another world, never mind trekking across the vast Martian desert in order to skyboard deep into the center of a (hopefully!) extinct volcano, Gilbert's had his hand full just trying to keep up with it all. And now it's up to him and his new friend, Aoleon, to face off against the evil Martian overlord and keep our cows safe at home where they belong.

The launch of this exciting and innovatively illustrated new series takes the reader deep into the heart of an unforgettable and out-of-this-world friendship in a story full of hijinks, hilarity, and good old-fashioned fun. Join Gilbert and Aoleon in this exciting middle grade science fiction adventure today!

My Review:
I usually don't review books younger than Y.A. However, my 6 year old nephew is spending part of the summer with me and I figured he would like this series though it doesn't have anything to do with super heroes. He loooooovvvvveeeeeesssssss super heroes!

He liked that it has pictures. For me, some of the postured were better than others. It seemed like they wanted pictures every few pages so some of them were random and really didn't work. For example, in the first book, there's a picture of Gilbert in the wheat field. It would have been better if it had of showed the space ship he was looking at. Each chapter starts with the first letter in a special space-y font. It worked better on some letters than other. Like the letter "g" was cool but "h" not so much.


In Book One:
We are introduced to Gilbert who is human (Terran as Martians call us) and Aoleon weho is Martian. Gilbert has been having a reoccurring nightmare. Aoleon likes to vsit earth and make crop circles. Gilbert had to flee and e ds up oin Mars with Aoleon only to find out something terrible.

Book was fun to read. Aoleon is a little trouble maker. Okay, maybe not trouble but she s mischevious. There are some good concepts as to how alien technology work. Things like nannites, different phase densities, and force fields are a part if creating this advance Martian culture. Story ends in a cliffhanger.
This was a slower pace than the first book. It definitely has a lot of background information in it as opposed to action. The end of the book is not much of a cliffhanger. I will say that that the pictures are better this time around as far as colors but still some are not very scene related
.

About the Author:
Mr. LeVasseur enjoys crafting good stories based on lovable characters designed to translate well to multiple media formats such as books, games, movies, and toys. He lives in New York when he is not commuting between Southern California and Olympus Mons, Mars. His hobbies include writing, 3D animation, musical composition, and intergalactic space travel. He also enjoys various sports such as skiing, running, and exospheric skydiving.

*This is an ARC
**If you would like to support this blog consider purchasing your books for the links provided. Thank you for stopping by. Comment, Share, and Happy Reading!
Posted by Bunnita at 7:00 AM